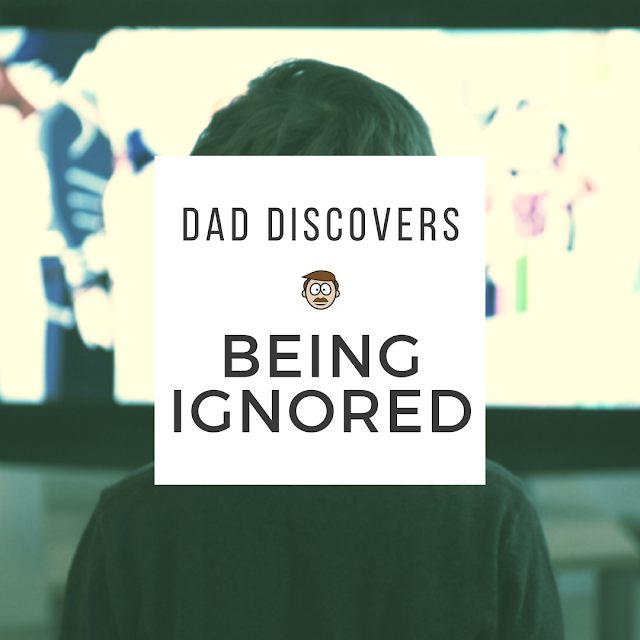 Parenthood can be a cruel mistress sometimes. There's been a lot said about the one-sided nature of the parent-child relationship, and that's unlikely to change until your children reach the age of 23 and wake up with the sudden realisation that you've done a lot for them and you weren't really trying to ruin their lives after all. And of course, nothing makes us appreciate our own parents more than actually having kids ourselves, which forces us to think about everything they had to put up with when we were kids. But although it's not always a bed of roses, few things will match the kick in the guts the day your toddler decides they can't be bothered dealing with you at all, and starts ignoring you.

It takes me about an hour and a quarter to get home from work including a lengthy walk and an even lengthier train journey. What keeps me relatively cheerful is knowing that my little boy will be waiting at the end of it. So imagine my joy when having walked through the door and into the living room where The Boy is watching TV, he proceeds to completely ignore me. Not just the usual casual lack of interest but an active attempt to not even look or acknowledge me. If I pick him up for a kiss he's been known to tilt his head to the side to continue watching TV without once looking me in the eyes. All dreams of your child shouting 'Daddy! Daddy!' and running towards you with a face full of joy when you walk through the door have evaporated. He's already found something more interesting than your presence, usually something with a cartoon face.

Funnily enough, this also applies to discipline. Often saying 'no', 'stop' or 'get down' will fall on completely deaf ears, and despite the growing seriousness of the request it will often be completely ignored as if you're not there at all and you start to question your own existence. But mention a yogurt under your breath in the quietest of tones and he'll be there like a shot pulling on your leg demanding dairy produce as if his life depended on it.

Another favourite that us dads often have to deal with is the mummy obsession. Every morning my alarm goes off earlier than I would like, and I drag myself bleary-eyed out of bed and into The Boy's bedroom to get him ready for the day. As my brain slowly catches up to my body and starts waking up I contemplate another day of being a dad, and another day with my little boy filling my life with wonder and excitement. And what are his first words when he sees me?

Well thanks a lot kid, it's lovely to see you too. Don't mind me as you rush past in your haste to see the Mummy.

Of course, this lack of interest in the Daddy lasts only as long as he doesn't need anything, and a short time afterwards he'll be pulling my trouser leg to demand anything from juice and snacks, train tracks, another episode of Peppa Pig or just that I jump up and down with him on the spot until I give myself a minor stroke.

I figure that all this is excellent preparation for the teenage years when he'll only want me for a lift in the car or some money, so I can at least be grateful that The Boy doesn't currently want £10 to go down KFC with his mates. As far as I know anyway. Until then it looks like I'll just be a needy dad.

Does your precious child treat you with cold indifference?