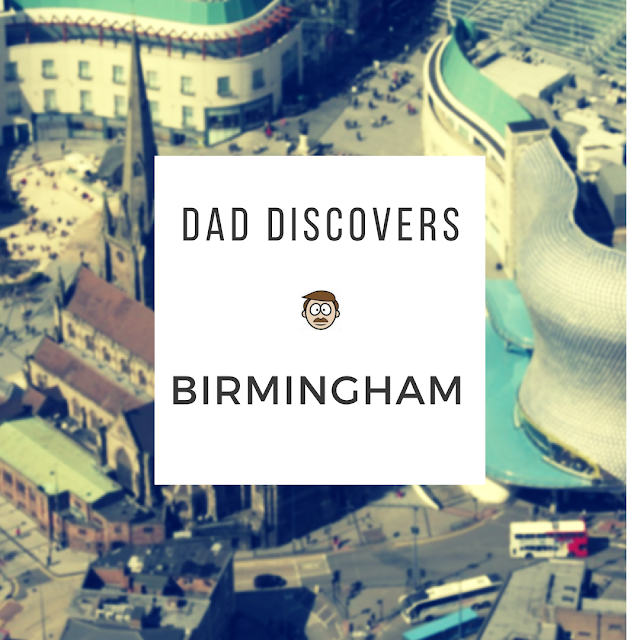 Let's all go and spend a day in Birmingham! Said literally no one ever. But being brave and adventurous we leapt into the unknown and became the first family in history to do a day trip to Birmingham. Probably.

In truth, despite having done a lot of international travel I still hadn't visited the UK's second biggest city and had no real idea of what there was to see (other than Brummies). What with it also being the nearest city to us after London, I felt this was a bit shameful and it was time to rectify the situation.

Fortunately at around the same time we were looking into this, there was a sale on with Virgin Trains and we'd managed to pick up some cheap tickets on a fast train. The Boy LOVES trains, so this was a perfect opportunity to get him on one, whilst not being a long enough journey for him to terrorise everyone on the carriage.

So having arrived at the swanky redeveloped New Street Station, our first destination was Brindley Place, at the heart of Birmingham's canal district. Having determined that the front entrance of the station would take us in the wrong direction, we headed out the back only to immediately get lost around some of Birmingham's less glamorous back streets. After weaving our way under an even less glamorous motorway tunnel and through a car park, we eventually found ourselves in a lovely canal district full of bridges and restaurants. 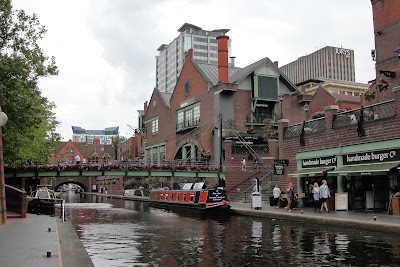 Having finally arrived, the first issue we had was trying to cross to the other side of the canal with the pram. Though there are lots of bridges you can only get on them by going up or down steps. Our search for some kind of ramp up took us about four bridges further than where we wanted to be, and even then still involved us having to get up a handful of steps. We had similar issues on the way back, and decided it would be easier to carry the pram down the stairs. There was a lift on one side of the canal that was designed to help with part of this, but this was out of order when we visited so the area can be tricky for people with prams and wheelchairs.

Though very pretty, having thought the area might be something like Camden or Shoreditch we were a bit disappointed to find it was actually more like Canary Wharf. Much of it was dominated by big corporate buildings and away from the actual canal there isn't much for visitors to see except the Ikon Art Gallery and the Sea Life Centre. The canalside restaurants all belonged to large chains, but nevertheless we settled outside a Pitcher and Piano and enjoyed our lunch whilst watching the narrow boats and the people go by. 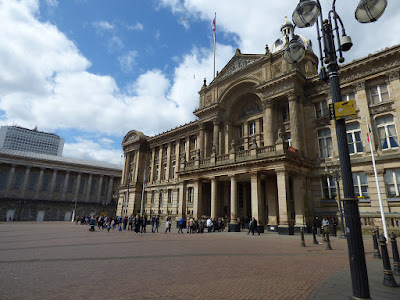 After struggling again to get out of the area with the pram (which involved us cutting through the International Convention Centre so we could use their lift), we found ourselves amongst a huge building site. It turns out that an large area previously known as Paradise Circus had been pretty much flattened and a £500m redevelopment project was taking place. We came across various other redevelopment areas during the day, but if anything it made me think that this was a city that was on the up. Once past this though, Birmingham has some beautiful grand old buildings including Birmingham Town Hall and the Birmingham Museum and Art Gallery, both situated on Victoria Square. 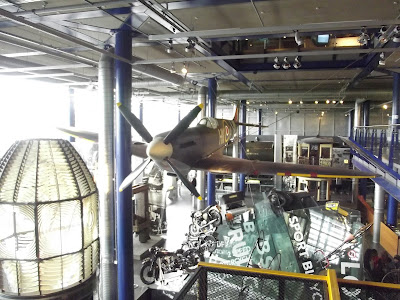 We wound our way through the city centre and out the other side to another new development called Birmingham Eastside to visit something called Thinktank.

Thinktank is Birmingham's science museum, and prides itself on having a lots for kids of all ages to see and do. Our first challenge was to find our way into the place, which involved entering a relatively unmarked university building and making our way up to the 2nd floor (this time with lifts!) to find the entrance. For one of Birmingham's main visitor attractions it seems strangely hidden away.

Once in though, Thinktank was great. It has four floors of exhibits including a Spitfire exhibition, a planetarium, some massive industrial steam engines, classic cars, a full-size steam train and an interesting interactive exhibit about science, technology and medicine. Of most interest to my two year-old though, was Kids' City. This consisted of a Biggleton-style town for kids including mini shops and offices that they can play in as well as corresponding outfits that they can dress up in to look the part. There are even working phones so that they can call their friends in different offices and a water play area which are all a lot of fun for little ones.

Finally, just outside the museum is the Science Gardens (which strangely you can only access by going back up to the second floor to get out of the museum, then back down to the ground floor to get out of the building, and then back through the gate). This contained more water play areas as well as interactive displays where kids can run on a giant hamster wheel, launch a bottle rocket or learn how to use pulleys to lift themselves off the ground.

The Boy loved all this, and it was lovely that there was lots to entertain him despite him only being two.

We finished up with an ice cream from the cafe, headed through the huge Bullring Shopping Centre back to the station, and boarded the train back home. The Boy had had a good day out and I could finally say I'd been to Birmingham. Bostin.