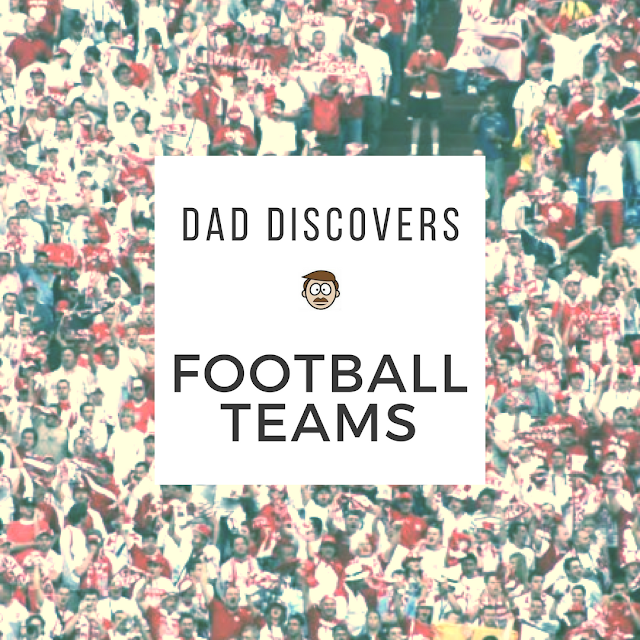 While watching the England v Colombia match the other day The Boy ran in and shouted: “Red team score a goal!” I was delighted by this until about 5 seconds later when he had a change of heart and declared “Yellow team score a goal!” and then annoyingly repeated that for the next few minutes before losing interest altogether and wandering off to play with some trains. At 2 years old it’s a stretch to get him interested in anything that’s not on CBeebies or Milkshake, but I realised that by the time the 2022 Qatar World Cup rolls around he’ll be six and will probably be a lot more interested in England’s success.

This got me thinking about supporting sports teams, the tribes we align ourselves with and how we often pass these allegiances onto our children. As an English kid with an English family, The Boy will have no choice but to support England. He’ll inherit the shared history of everything the English team has or hasn’t done over the years and that history will be influenced by this very tournament that is happening at the moment. The plucky underdogs. The past glories. The years of disappointment. The sense of having ‘invented the world’s game’ and wanting to see it ‘come home’. He’ll have all that whether he wants it or not.

And that’s just the national game. Having a dad who comes from a large family of staunch West Ham fans he’ll also be indoctrinated as a Hammer whether he likes it or not. Sure, he could decide at some point to become an Arsenal fan or a Man City fan, but it’s fairly unlikely to happen. I could decide I wanted to get Italian citizenship if I felt like it, but I’m likely to stick with what I’m used to. So he’ll inherit the misery of being a West Ham fan, which if I’m honest with you is almost identical to being an England fan! Massive success in the 60’s? Check. Years of disappointment ever since? Check. ‘Playing football the right way’ but not converting that into results? Check. Passionate but occasionally yobbish fan base? Check. It’s like I’m doubly condemning him.

I’m going on about football here, but having thought about this it throws up much bigger questions about the other cultural baggage that our children inherit. Their nationality. Their race. Their religion. Which part of the country they live in. What social class they fall into. All these affect the way they will view themselves as well as the opportunities and constraints they’ll have in their lives, and it’s something as parents we don’t have much control over.

As I settle down to watch England in the Quarter Finals on Saturday part of me will be hoping we do well for his sake. No six-year-old deserves 56 years of hurt.